Why Doesn't AT&T 3G or SMS Messaging Work During the NBA Finals? 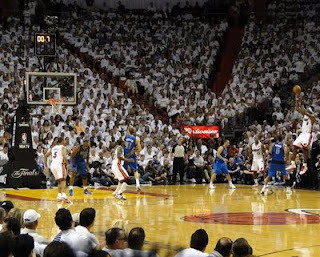 During the NBA Finals, some of my Bros have asked me why they can't send a AT&T SMS Message or use their AT&T 3G iPhone Apps during the game. They content that either something is wrong with their phone or AT&T or the American Airlines Arena in Miami is blocking services. Meanwhile, with over 20,000 fans in the American Airlines Arena, I see Verizon and other Non-AT&T Customers around me texting away.

Meanwhile, as soon as the game gets out and you are walking out of the Arena, you start receiving some of your SMS Messages. When you check your AT&T SMS Messages, you have a number of failed or un-sent messages.

The problem is that their are too many AT&T customers using iPhones trying to access their services. AT&T just doesn't have enough capacity to handle the thousands of fans trying to use their services simultaneously during the game, at halftime and timeouts. It appears that the technology is not there yet for AT&T to shift their resources during special events like the NBA Finals in Miami, Florida.

Loyal AT&T iPhone customers like me rightfully deserve better all around service for the prices we pay for both our phones and the related service. Having a Verizon phone as a backup isn't necessarily a "One Stop Shopping" solution.
Posted by martinog at 8:04 AM