In the last several weeks, I have been emotionally exhausted after watching the television and reading the media coverage of the state of our U.S. and global financial markets, the coverage of our U.S. presidential election/debates and the $700 Billion Bailout Bill Congressional Hearings. The information provided with these media sources was not necessarily helpful in answering my important questions.

So today, I searched the Wikipedia.org website to find out what the Editors of Wikipedia.org (whoever they are) have to say about the our U.S. and Global Economies. There is a main article on the Wikipedia.org website: Economic Crisis of 2008 which includes a summary of another Wikipedia article: the Global financial crisis of September-October 2008 also referred to as the Liquidity crisis of September 2008. These are well-written articles that concisely explain how our economy and financial markets got to where they are today.

These articles are updated daily which is necessary for these topics. They also attempt to be as factual as possible which is important during these are very tough times economically, financially and emotionally for all of us -- Americans and people around the world.

In other words, if you are pondering what to do with your financial investments right now, these articles are must reads!
Posted by martinog at 8:53 AM No comments:

iPod Wet Screen - Use Zip Lock Bag and Rice to Repair it.

Here is something to try if your iPod gets wet or damp and your iPod has a White Screen or a Blank Screen. In this case, the iPod functioned but you could not read the menu items on the screen. Before I tried this, I reset the iPod and restored the iPod but neither of these worked.
In this case, the iPod Nano screen became active after only 1 hour. I absolutely could not believe this procedure fixed the iPod Nano LCD Screen after it got wet!

My next steps would have beeen to take the iPod apart then order a new screen for $29.95 + shipping or call Apple Care. I am glad I didn't have to resort to those options. 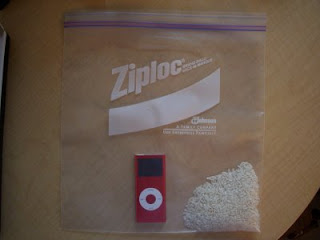 Posted by martinog at 9:49 AM No comments:

I downloaded and installed iTunes 8.0.1.11 for Windows and iTunes 8.0.1 for the Mac today. There were some reports of some users having problems synching their iPhones after installing this release. I didn't encounter any issues. Here is a list of its new features.

Apple has released iTunes 8.0.1, a significant update to the media playback/purchase, and device synchronization tool.

Among the enhancements in this release:

Posted by martinog at 9:47 AM No comments:

Here is a great Hulu tutorial video about the TV Converter Boxes you may need for some of your non-cable or non-satellite TVs or for your parents. You will need the boxes by February 17, 2009. If you need to order one for them, go to: https://www.dtv2009.gov/