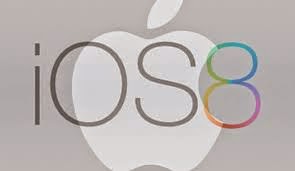 I had over 10K photos in my iPhone Camera Roll and had a feeling that when I upgraded my iPhone 5 from iOS 7 to iOS 8, there would be issues -- and there were!

Before I started the upgrade process, I manually backed up my iPhone with iCloud. Then I tried upgrading with my wi-fi network. It successfully downloaded the iOS 8, but during the verification process, I received a message that the iOS 8 verification failed. After several attempts to restart this process, about the time I concluded that my iPhone would not upgrade via wi-fi -- my phone displayed the iPhone Cable screen to plug it into your Computer.

So I went to my Mac, downloaded the new iTunes, plugged in my iPhone. It then restored or installed iOS 8 into my iPhone. After several reboots it successfully reinstalled my iPhone Contacts, Messages, Phone Call History, Notes etc. Unfortunately, since I have a 64GB iPhone, it took 4-6 hours or more to re-download the Apps. During that time, I had also upgraded many of the Apps.

Additionally, some of my Music downloaded, and some songs I had to tap the cloud to re-download it.

Now to the Photos. With iOS 8, the Camera Roll Album has been deprecated or phased out. You now see a Recently Added, Recently Deleted (great feature) and several other Albums and on the bottom of the screen the message "Downloading". In Photos, you see the Years and in my case I noticed that iCloud restores the photos by date starting with your oldest photos. And after 10 hours, it appears to have gotten in 2010 at some Aldi grocery store in South Florida that I'll never go to again since we now have a Trader Joes here.

After googling around for the answer including stops in the Apple Forums, Twitter -- I finally decided to reboot my iPhone (isn't that usually the solution and I don't need to speak to an Apple Genius to figure that out). So sure enough, after the reboot it appears that iCloud was starting to restore some photos but it still appeared to be very slow. So I went to iPhone Apps and Upgraded all them since there appeared to be some that were also stuck.

Eventually, if I opened my iPhone Photos Years, I could visually see iCloud slowly restoring my 11K photos in chronological order from oldest to newest. This may take another 24 hours or so at the rate it's going. But hopefully with iOS 8, I will find a way to backup my iPhone Photos (but that's another blog).

Note: What I should have done was use the Apple Mac Image Capture Utility to backup my iPhone Camera Roll  to my Mac and delete some of the photos. I have a Hoarder Gene in my DNA and never spent the time to remove many of the photos from it. I don't use Apple iPhone and the Camera Roll was so big that Google Picasa was never able to back it up.