This morning I received a Facebook Message from one of my "trusted friends" with a message to "look at bestspace.be". When I tried to post a message on my friend's wall with the website address bestspace.be, FB blocked or filted the URL bestspace.be from being posted. What I don't understand is why FB can't block the SMTP messages from being sent.

To reply to this message, follow the link below:
http://www.facebook.com/n/?inbox/

___
This message was intended for xxx@xxx.com.com. Want to control which emails you receive from Facebook? Go to:
http://www.facebook.com/editaccount.php?
Facebook's offices are located at 1601 S. California Ave., Palo Alto, CA 94304.
Posted by martinog at 9:40 AM 4 comments:

If you've received a Facebook message like, that links to a Login page at www.kirgo.at or another.at page, don't log-in. It is a phishing scam.

Facebook really should have a security system in place to disable these messages quickly.

Your Friend sent you a message.

To reply to this message, follow the link below:
http://www.facebook.com/xxxxx
___
This message was intended for xxx@xxx.com. Want to control which emails you receive from Facebook? Go to:
Facebook's offices are located at 1601 S. California Ave., Palo Alto, CA 94304. 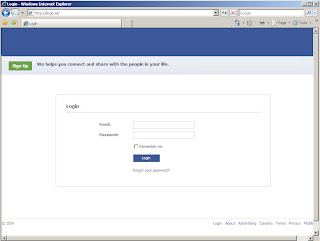 Posted by martinog at 2:08 PM No comments:

Huh, I just noticed that XM Radio removed their online service from its basic subscriber package. For this loyal XM Radio customer who has been paying for their service in his car for almost a decade, they want another $2.99 per month for it. I didn't listen to the service that often but once in a while if I wanted a break from my iTunes, I would listen to it. Also, all of their channels were not part of the free service such as ACC football. I hope for the $2.99 per month, you get all the channels and it just isn't the old limited set of channels and the purported "higher digital quality audio". This techie doesn't really believe that line! It's not a large amount of money, but what ever happened to the concept of "grandfathering" your early adopters, i.e. taking care of your loyal customers. It use to be that once you provided a customer with a service, you didn't take it away. Out of principle, I will not be paying the $2.99. Also, I understand many Sirius customers were promised a lifetime membership, but after the merger, they had to pay additional fees to get the XM channels. If this doesn't sound like a "Monopoly" or unfair pricing, then what is?

Here the letter I received from them. If XM didn't have a monopoly, I would be switching to Sirius.

Thank you for contacting XM.

We have received your email and we are sorry to hear that you are no longer able to get XM Radio Online. Since March 11, 2009, the online listening platform was upgraded to a higher Digital Quality Audio and is no longer included free as part of a base subscription. XM Radio Online is now $2.99 per month with a radio subscription.


To add XM Radio Online to your subscription, please go to http://www.xmradio.com/getxmro/index.xmc and follow the instructions provided. If you are having difficulties, please contact our Listener Care Center directly at the telephone number provided below. Our representatives will be more than happy to assist you.

If we can be of further assistance, please feel free to send an additional email or you may contact a Listener Care Representative directly at 1-800-XM RADIO (800-967-2346). Our Listener Care Center's hours of operation are as follows:

Taking my iPhone to Europe or Abroad - iPhone International Plan

In the past, when we have traveled abroad, I've disabled iPhone features by enabling a SIMM Pin and used the Wi-Fi on my phone only. What I discovered is that Apple has since changed their iPhone Software and Wi-Fi now works on Airplane Mode so disabling the SIMM Pin is no longer necessary. For this trip, I will be signing up for an International Roaming Package so that I can use the iPhone's 3G service for directions, checking mail and receiving text messages. Here are the details:

1. AT&T International Plan Customer Service 1-800-335-4685 - The day before I leave, I'm called them to subscribe the following services:

2. Forwarding -- Before I leave the United States, I will use the iPhone to forward my calls to my Google Voice number. When people call this number, for any voice messages, text transcripts will be sent to my phone using Google's new cool service. I am lucky to have one of these beta accounts.

More info is at the link below.

4. Canceling - When I get back to the States, I will cancel the plan without any penalty.

6. International Usage -- On my first day of travel, we landed in Madrid, Spain and drove North to Salamanca. The first thing I noticed was that I was not able to connect to Google Maps until I re-booted my iPhone several times (i.e. everytime you change Cellular providers such as Vodafone, Orange). Google Maps worked, but I'm not convinced it was as accurate as in the United States in the smaller town of Salamanca.

7. Photos and Google Maps - I normally blog on vacation and like to upload photos from my iPhone. As you would expect, each blog photo uploaded used a good amount of my daily 1.67 MB data usage. In addition, Google Maps also uses up your data.

8. Email - Spain didn't have good free wi-fi service like some other countries so I was judicious about checking my email, especially with the amount of spam I get in some of my accounts.

9. Coverage - For celluar service and 3G on the train from Madrid to Barcelona was also better than I expected.

10. Wi-fi - A side note that wi-fi was $20 to $26 per day in Spain and Switzerland. When I had Internet cable access in Barcelona, I actually used wi-fi sharing for the first time. My daughter was able to use my Internet connection and I also used it to connect my iPhone.

11. AT&T Text Message - Reset Statistics - On the day my billing period ended, I received a very informative text message from AT&T reminding me to reset my statistics and of the $5.12 per MB overage charge.

12. Text Messages - When using this service abroad, my incoming messages were generally unrelaible. There appeared to be a long latency from the time someone in Spain sent me a text message to the time I received it. In general, this was not expected.

12. Returned Home - I returned home and canceled my International plans today. I had to wait a few days to avoid the data plan overages.
Posted by martinog at 10:15 AM 3 comments: