Media Getting Edgier - Flo Rida and the Residue Is Evil Ad

If you don't think TV and Online media is getting edgier and edgier lately, here are two recent examples. On the NBC Today Show this morning, viewers and their children were having breakfast to the tunes of Flo Rida Right Round - "You spin my head right around, right round, when you go down... I understand that these are the songs our teenagers/children are listening to anyways, but I was a bit shocked because of the some of the subliminal or not so subliminal messages in the lyrics in these songs.

Visit msnbc.com for Breaking News, World News, and News about the Economy 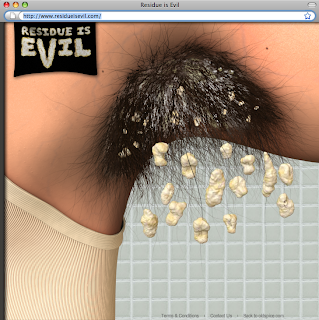 The ResidueIsEvil Ad believe it or not is an Old Spice Men's Deodorant ad. This ad appears on many of the twenty-something men's websites for sneakers and X-box items, which I'm sure are also includes teenage boys. And if you you don't think there are any subliminal messages in this ad, then I'm not sure you are living on the same planet.

So many of you may not be surprised by this, but it seems like just the other day Howard Stern was publicly criticized by the language he used on the radio and then there was the Janet Jackson incident during the Superbowl.
Posted by martinog at 10:30 AM