Picasa for Mac Sizzles, much better than iPhoto 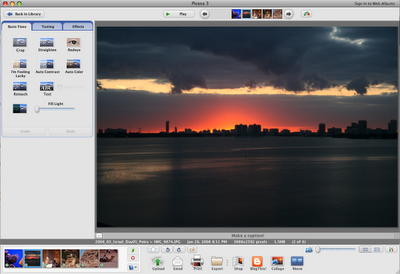 I finally installed Picasa for the Mac Version 3.0.6 today and it absolutely sizzles! It is much better than Apple iPhoto for cleaning up pictures. I've been using the Windows version for a number of years and finally decided it was time to switch!

I especially like the "I'm Feeling Lucky" feature for Basic Fixes or photo touch up and the Crop feature.

If you haven't tried it yet, here's the link.

Also, I usually select the option to have Picasa search my entire hard drive for photos. However, be careful with that feature since Picasa will possibly find every joke email attachments that people sent you and who knows what else. You might have to do some clean-up after it is installed.
Posted by martinog at 10:51 AM

I completely agree with you. I also like Picasa more. A few days ago I found a website, that could picasa for windows 10 free download https://yepdownload.com/picasa on my computer. I also like the fact, that Picasa supports Google+ accounts and can automatically create backup copies of all the photos. This is a great option of this program!